Just thought I'd let you know that I picked up the Delica last week from Dave at Caloundra and everything is great! I think it is the perfect car for us. 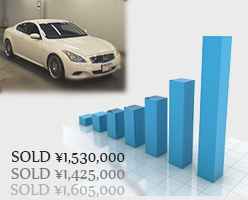 View typical prices for each model based on spec, year, mileage and condition

Introduced in 1990 and manufactured until 2000, the Soarer was designed in many ways as a luxury coupe to co-exist with the Toyota Celsior and shared many components with Toyota's flagship luxury model. Sold in other markets as a Lexus SC300 or Lexus SC400, the Soarer was the height of Toyota's luxury development, with a little bit of sports car thrown into the mix as well.

Toyota's technological prowess was on display with standard and optional features such as a digital dash instrumentation, an in dash touch screen, electric seats with memory, reversing camera, height adjustable air suspension, and active suspension on UZZ32 models.