Sorry I have taken so long to get back to you but I am still pinching myself that I own this car. When you said it was practically a new car, you were not joking as it still had some of the plastic coverings on the inside.

It is absolutely beautiful and a dream to drive. I will definitely be using your company again in the future. 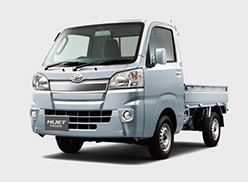 Now based on the CT9A chassis type, the EVO 7 gained some weight compared with earlier models, but also improved the interior feel and quality significantly, and is a very easy car to drive daily while still housing a monster within. The chassis was made considerably stiffer than the non Evolution base model Cedia, and for the first time an active centre differential was added, as well as active yaw control. Combined with improved front and rear diffs the yaw angle of the car is easily controlled by both the driver and electronic means making for improved handling and easily controlled oversteer if the driver wants it.

The Lancer EVO 7 is 50% stiffer than the base model Cedia with additional bracing, thicker sheet metal in high load areas, seam welding around the B pillars and chassis, and over 200 spot welds. Weight was reduced via thinner glass, aluminium suspension components, aluminium front fenders, thinner roof sheet metal, hollow camshafts and a magnesium cam cover.

Power is at 208kW (280hp) and as always the car was an evolved improvement over the previous model in many aspects.

Evolution 7 GSR
The standard EVO with Brembo brakes, Recaro seats and Momo airbag steering wheel. This model is allowed for import
Evolution 7 GT-A
For the first time the GT-A saw the addition of an automatic gearbox to the Lancer Evolution lineup with a 5 speed tiptronic transmission. Gear selection can be manually selected from steering wheel buttons, and the gearbox is capable of learning the owner's driving style and adapting accordingly. A slightly softer version of the EVO, it featured different 17 inch wheels, 20hp less, a slightly softer ride, slight styling changes, the option of a shorter rear spoiler or no rear spoiler (as well as the standard EVO 7 spoiler), and the bonnet vents were removed to reduce noise at highway speeds. It also had more sound deadening and the interior came with either velour trim, leather, or Recaro seats. Chrome beveled gauges and chrome door handles are also other distinguishing GT-A features. This model is allowed for import
Evolution 7 RS
The model intended for race use. Made lighter with optional aircon and power windows, plus different turbo specs. So strong is Mitsubishi's assumption that the RS is for race use it comes with standard Mitsubishi Cedia seats and brakes since for competition use these parts would be replaced according to the owner's wishes and requirements. This model is not allowed for import 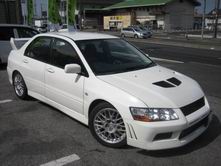 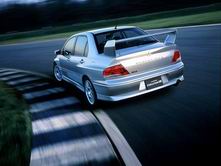 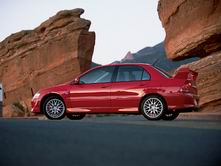 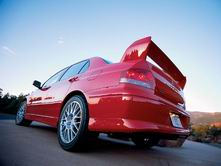 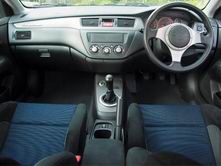 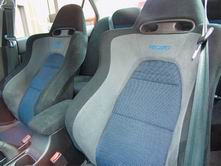 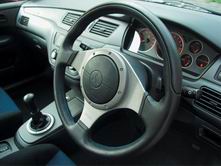 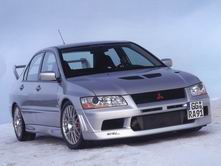 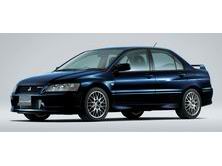 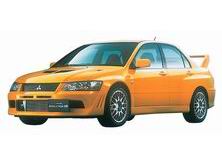 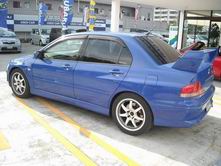 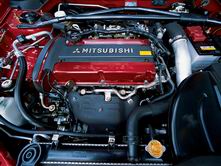