The basics you need to know

Cars put up for auction are first surveyed by the auction house and a condition sheet is created. This contains information important to a prospective buyer such as vehicle details and model type, what options are fitted, mileage (including if there is any reason to doubt that the mileage is genuine), body condition, interior condition, mechanical condition, any modifications/non standard parts, and evidence of accident history. Vehicles are also given a grade which acts as an overall rating of the quality of the vehicle to assist buyers to determine at a glance if a car is in good condition or not and decide if additional details are worthy of investigation. Although it varies for each auction house, a front, rear and interior photo is also taken of each car for you to look at.

Auction sheets are a good source of information to initially qualify a car as to if it is worthy of further investigation, however J-Spec does NOT buy cars based on the auction sheet alone. We also always have cars looked at by someone in person to verify the condition of a car, get further detail and ensure that there are no problems evident that the auction sheet might have missed.

The auctions J-Spec covers includes both some of the large, well known auction houses which list thousands of cars each week, as well as smaller auctions with fewer vehicles or in less populated areas. Different auction houses may have slightly different grading systems and ways of indicating condition, and some will grade a car more harshly or be a little more generous than others. Cars might also sell for different amounts at different auction houses based on the number of potential buyers present, and for example you can get some real bargains from some of the lesser known auctions at times.

The following is a brief explanation of the auction grades you will typically see, please see the "Further detail" section for a more thorough explanation and details of what is on a typical auction sheet.

Keep in mind that although auctions and auction sheets seem daunting and confusing, J-Spec is here to help customers understand what is going on, help them in their choices and of course ensure they don't end up buying a poor condition car. As such the information provided below is not necessary for people to know as we will take care of these complicated issues for you, but it is provided for those who would like to learn as much about the process as possible.

Auction sheet formats vary from auction house to auction house, however many share similar conventions in naming and symbols. Some of the sheet is in Japanese and J-Spec will translate all of the relevant information for customers, and of course have the car inspected further if it looks like a promising vehicle. That said, without understanding Japanese you can still learn some of the basics about a car armed with a bit of knowledge about what is on an auction report.

Below is an auction report from one auction house which outlines the information typically listed: 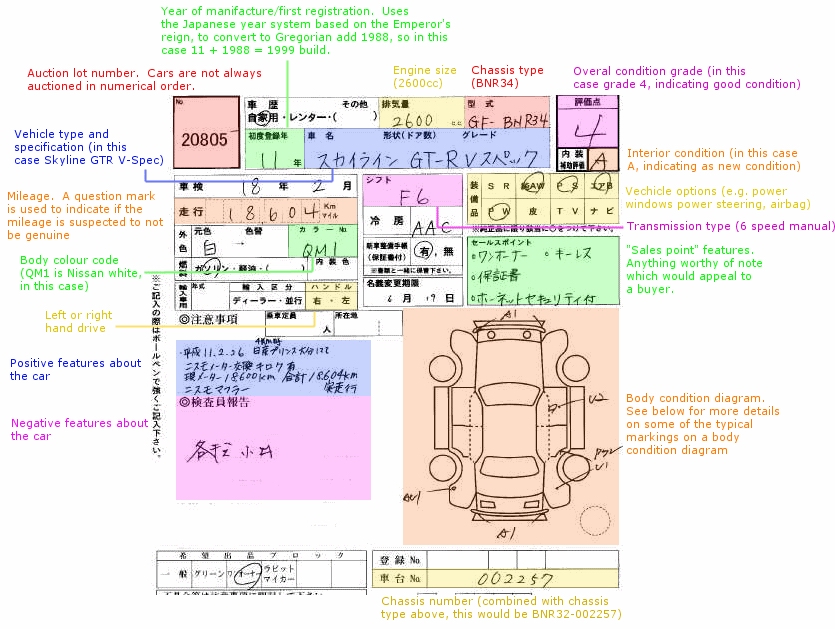 The overall auction grading system can vary from auction to auction, but as a rough guide:

As well as the overall/exterior grade most auction houses will also include an interior grade, normally A-D. These correspond with:

Transmission types are noted in a variety of fashions, as a rule if a car is an automatic it will have an A in it (for example FA, FAT, AT), otherwise its most likely a manual transmission. Common manual designations include F5, F6 (indicating a 5 or 6 speed), MT, 5MT, 6MT and so on. On occasion a column shift transmission vehicle will include a C somewhere in the designation. Tiptronic transmissions are usually just referred to as an automatic.

Common codes on the body diagram of a car include:

Most of these are also included with a number from 1 - 3 indicating severity (from minor to major), so for example an A1 would be a minor scratch, S3 would be very bad rust, and so on.